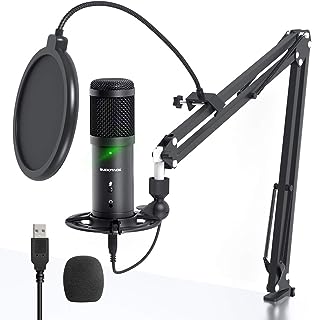 Microphone types are a very comprehensive and detailed topic. Diversity is increasing according to the purpose and area of ​​use. In nature, sound is produced by various sources and is carried around in the form of sound waves by activating air particles. Sound waves; According to the source from which it is produced, it has power, width and similar elements. This is where microphones come into play. Microphones have the ability to detect and read these sound waves, thanks to their vibration-sensitive structure. Many microphones do a flawless and extraordinary job with the sound card to transfer these sound waves to digital media, thanks to their highly sensitive structure.

The indispensable element for microphone types and models is the sound card. Sound cards convert the audio signals captured by microphones into digital audio data that can be read and written by digital media. Sound cards, which act as transformers within the systems, are of vital importance. Every human community, every living thing and every system needs a common language to communicate, and these languages ​​also vary.
Sound waves switch to the language type consisting of numerical data valid for electronic media with sound cards.

Microphones are indispensable audio equipment. Microphone models are divided into wireless, wireless and wired. Wired and wireless models of a microphone model, which can be of the same type, are available.

What Is The Difference Between Wired Microphone And Wireless Microphone?
If there are suitable environmental conditions, that is, if there are no radio frequency or similar wireless signal damage, wireless microphone models work very well. In addition to its functionality, it eliminates cable pollution and reveals more free movement space. These products are used with or without battery at certain time capacities. Wireless models are generally more costly than wired models. You can decide on this main element, which should be evaluated according to the area of ​​use, in the focus of your financial possibilities.

Handheld Microphone
It is the most widely preferred microphone type that can be encountered frequently in the stage, studio and similar areas. Along with wired and wireless models, it has a variety of microphones suitable for many levels. With different polar patterns; There are products in which the sound character, ie treble, bass and mid-like elements predominate.

Lavalier
Lapel microphone is a very small type of microphone that has been popular in recent years. It is so small that some models can be camouflaged invisible to the eye. Lapel microphones positioned on collars and similar points are the favorite of youtubers and similar social media content producers recently. [video]

Head Microphone
Head microphone, commonly known as a headset. In addition, in head microphone models, the continuation of the product, which is positioned in your ear with the help of a tiny earpiece, extends towards your mouth, thus providing efficient sound transmission.

Table Microphone
Table microphones are also preferred by new generation youtuber and twitch players. They are specially developed according to the table. These are microphone models produced for speaking in conference halls and similar areas.

Box Office Microphone
Thanks to these microphone models, which are generally produced with the push to talk logic, the speech is transferred across the box office and similar areas with the help of a button. It is preferred in many areas that are open to service and where there are intense people entrance and exit.

To decide which microphone to buy, you can do a detailed review on our site.