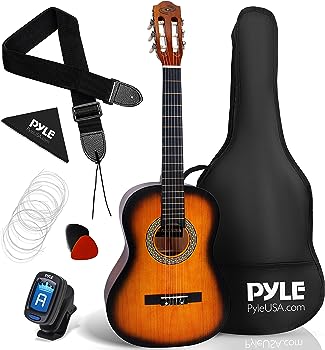 The guitar is one of the first instruments that comes to mind when it comes to music. Almost all music groups have a variety.

How do we play the guitar? Touch the wires on the body with one hand. With the other hand, we put pressure on places that correspond to the sound we want to receive. The place of the guitar in the world of music is quite wide. Sometimes it becomes the background sound, sometimes it is the central sound. Sometimes we hear the sound of guitar solo. The guitar appears almost everywhere there is music.

Parts or Parts of the Guitar…

Handle:
It is a thin and long area with frets and notes and chords on it. The handle or keyboard, which is one of the most used areas, is combined with augers at one end and the body at the other. It is very difficult to use for beginners to guitar. But over time, it turns into a dance floor where fingers can dance freely.

Curtain:
They are thin lines with a length compared to the diameter of the handle according to the wires passing over it. Depending on the type of guitar, an average of 21 and 24 frets can be found. The most accurate sound is achieved when pressure is applied with sufficient force to the exact midpoint between the two frets. The sound becomes thinner as one moves towards the trunk. Frets, one of the most important parts, will turn into a direction finding tool for guitar players over time.

Augers:
It is the part located at the far end of the guitar stem. It is the section where one end of the strings that can be turned in different directions by pinching with two fingers is tied and allows us to tune. It is also called ear.

Bridge:
The part after the body hole is the part where the other end of the wires on the body is connected with small knobs. When using the guitar, it is generally located under our wrist in the form of a strip. While using the guitar, this part is not touched.

Sound Hole:
In acoustic and classical guitars, it is the hole in the body. It is located in the part towards the handle, next to the large diameter bridge. It gives out the sound of the movement of the strings by taking it into the inner part of the guitar. It can also be found on guitars that connect to some electronic device. An electric guitar without a sound hole cannot be used without an amplifier.

Wires:
In guitar, it is the main source of sound. It starts from the augers. On the handle, it is fixed to the bridge by passing through the stem hole and stem. The number varies depending on the type of guitar. They will be thick or thin. Care is important. They are the most frequently changed parts on the guitar. Beginners can often tear strings while tuning.

How to Tune the Guitar?

With the help of the augers at the tip of the handle, it is necessary to make adjustments to obtain the correct sounds. These adjustments are called chords. Assuming that the thickest wire at the top is at the correct volume, you can arrange the other strings in sequence according to this thickest wire. Therefore, the sounds should become thinner as you go down. Electronic devices or smart phones can be used to accurately tune.

What are the Guitar Types?

What is a Classical Guitar?
It was designed by Antonio Torres of Spanish descent in 1850. It is one of the most used guitar types in the world. Generally it has 6 strings, wooden body and handle. It is quite useful. These magnificent products, which we can call the first version of the guitar, are very light. Its strings are made of hard nylon. Classical guitars are produced more massively than other guitars. Thanks to their designs and materials, their prices are affordable. It is often preferred because it is easy to reach. Classical guitars are generally the first choice of those who start playing the guitar.

The most important building block of this guitar, which was developed in the 19th century and completed its development in the 20th century, is the steel strings. Interest in acoustic guitar is increasing day by day. These musical instruments, which provide versatile use, are more expensive than classical guitars in terms of price. While the wires and parts are a bit more expensive, they're worth every penny you spend. It offers high levels of sound by means of amps and similar devices. It is widely used in many areas such as concerts, events and so on.

What is an Electric Guitar?
It is a very effective guitar type that adorns many young people's dreams. This musical instrument, which does not have a hole in its body, is used with the help of an amplifier. Because the sound alone is produced at a very low level. The sound produced in electric guitars is converted into digital sounds with the help of amps and similar devices and broadcast at the desired volume. It was first designed in 1931 by George Beauchamp. At that time, it was called a frying pan. In 1936, it was patented by George Beauchamp of Rickenbacker Electro as an electric guitar. In fact, the first foundations of this magnificent guitar were laid in 1924 by the sound engineer Lloyd Loar, through his studies on guitar magnetics. This magnificent product, which should be evaluated very comprehensively in terms of cost, has a very wide price range.

What is a Bass Guitar?
It is a very diverse musical instrument whose voice is quite thick and has a fa key in its portrait. The way it works is almost the same as an electric guitar… There are models with 5 strings, 6 strings, 12 strings and even fretless or headless.

In the 1930s, the first horizontally used electric and fretted bass guitar was produced by the inventor and musician named Paul Tutmarc. Often four and six strings designs are widely used, precursor to bold and rhythm sounds in stages. Interest in this valuable musical instrument is increasing day by day.

This device, which seems quite difficult at first glance, actually has a very simple structure. It is divided into two classes as electrical and acoustic. In electric bass guitars, the sound is re-transmitted at an audible level with the help of an amplifier. In acoustic ones, there are quartz crystal piezoelectric sound receivers known as piezo to carry the sound to the amplifier.

Bass guitars require special amplifiers that can reproduce sounds better than electric guitars. After purchasing this musical instrument, which has a very wide price range, its very thick strings should be carefully and regularly maintained.

What is Lap Steel Guitar?
It is a type of guitar that originated in the Hawaiian lands in the 1920s. It is played with the slide technique by lying on the lap. Without a pen, sound is produced by a metal ring. The way it works is generally similar to the electrogitara. This musical instrument, which you can encounter quite often in blues and country style music, is available in 9, 7 and 6 stringed versions.